Have you yet wondered what the hype around in-page push is all about?

On the one hand, we have the classic push ad format (which is a very popular ad format for a lot of affiliates), and, on the other, we have banner ads.

Each ad format has a large following of affiliates that like it for what it can offer.

But, as with any ad format, both classic push and in-page push ads have their shortcomings.

Now imagine for a moment if you could take the best parts of each one to make a new ad format.

Actually, you don’t have to imagine, as this format already exists, and it’s called In-Page Push.

In-page Push is a hybrid style ad that looks and feels just like a regular push notification but operates as a banner inside the website.

Let’s see how it looks! 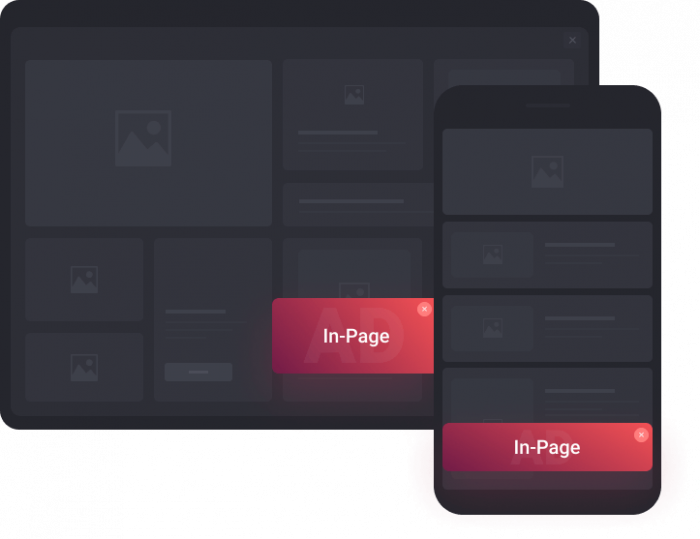 What is In-Page Push, exactly?

In-Page Push is a banner ad on a webpage that does not have a fixed placement in a content block. Rather, it floats on the top or bottom corner of the screen, which makes it look just like a push notification ad.

It has everything a regular push ad would have, Title, Description, and Icon, so as far as the user is concerned, it’s basically the same thing. But, for an advertiser, there are distinct differences that make In-Page Push a game changer.

There are even more reasons to try In-Page Push. Push.House has created the perfect conditions for you to dominate this ad format, giving you the best CPC bids on the market! We’ll talk more about this in just a tick.

First, let’s find out what’s so great about this new ad format!

What Makes the In-Page Push Format Worth Your Time?

In-Page Push has a lot of neat features, that make it an exceptional ad format for all verticals:

Why Run In-Page Push on Push.House?

Push.House has risen to fame by having a reputation for serving high-quality push traffic, and it aims to carry this legacy over to the new In-Page Push ad format.

Push.House also offers the best CPC bids for In-Page Push on the market, starting from bids as low as $0.0001 for all GEOs.

This means you get the same quality, same volume, and a cheaper price!

Here’s an illustration showing the volume of In-Page Push traffic: 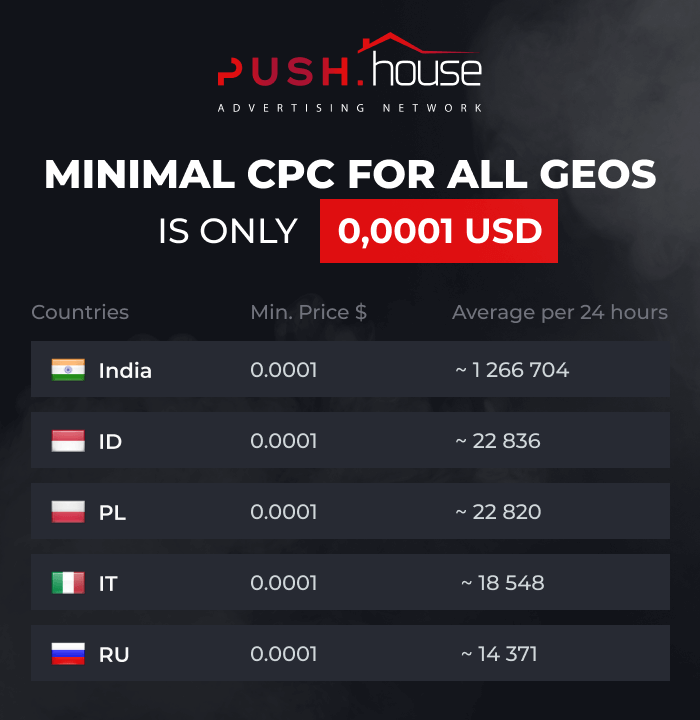 As you can see, there is more than enough traffic to go around, so now is the time to try out this new format for yourself, while the prices are at an all-time low!

But we wouldn’t want to just give you low prices, without giving you some insights about the traffic and campaign optimization.

Cheat Sheet to Make the Most of Your In-Page Campaigns on Push.House

There’s one element missing from in-page push campaigns, which you’ll find in the classic push notification format. This is the main image. You’ll find this makes it easier to run split tests, because you have one less element to test.

It also gives you a great opportunity to reduce your test budget.

You can run multiple split tests on In-Page Push, and then, when you find a winning combination of (title+text+icon), you can also copy this to the classic push ad format.

This will save you both time and money during the test phase.

Then, when you copy your campaign to classic push, all you have left to do is to run a quick split of the main image.

Let me show you how to do this:

The goal here is to scale. You can easily run dozens of campaigns at the same time, securing a decent daily income. And, every time you find a winning creative, you can duplicate it to both classic push and iOS formats.

Combine this winning strategy with competitive prices from Push.House, and you’ll soon become an unstoppable force!

Want even more value? We’ll even throw in a bonus for good measure!

Simply add the code MOBIDEA50 to any new account, and get an extra 50% added to the value of your first deposit for free.

5 Ways to Start Getting Out of Debt Slowly – ShoeMoney

8 Simple and Effective Ways to Grow Your Email List

Newspaper is your news, entertainment, music fashion website. We provide you with the latest breaking news and videos straight from the entertainment industry.